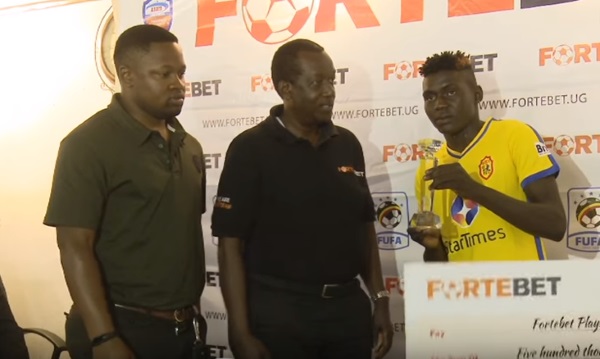 Muhammad Shaban’s perfect start with KCCA FC after a long transfer battle with his former Club Onduparaka FC paid off immediate dividends. This after the striker was crowned the Uganda Premier League Player of the Month of November. Shaban scored 6 goals in as many matches during the month including a hat trick against Soana FC. The player received his award today alongside Kirinya’s Fred Amaku and Vipers’ Mzei Dan Serunkuma. Amaku was named best player of December after he netted 2 goals against KCCA and Sports Club Villa. Daniel Serunkuma walked away with the February player of the month award in recognition of the form he exhibited after he swapped Express FC for Vipers FC.

“These awards mean that I have been working very harder in the last couple of months and it motivates me so that at the end of the season we achieve more big awards than these.” Said, Dan Serunkuuma – Player Vipers SC. “The effort I have has pushed the team somewhere though the other players are in big teams. So the personal effort that I have has made me achieve that.” Said, Fred Amaku – Player, Kirinya Jinja SS. “You know as a player those small things encourage. I want to work extra harder and this award is going to encourage me to work extra to see that I win more and more.” Said, Shaban Muhammad – Player, KCCA FC.