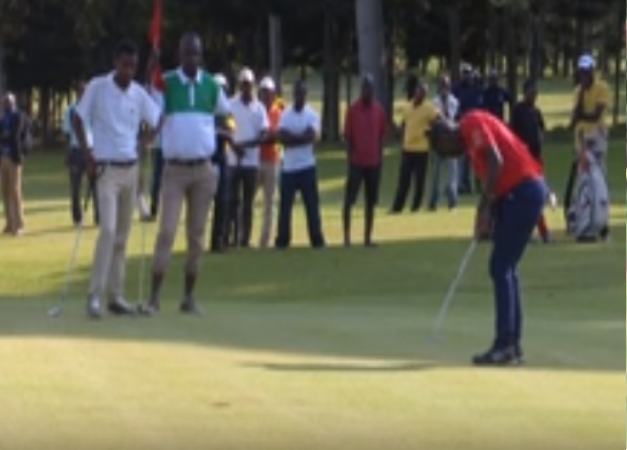 After opening up a 1.1 lead following the early morning 4 balls, Uganda let its guard down at the Spur Entebbe Course and was almost made to pay. Kenya’s pairings almost worked out perfectly in the afternoon foursomes with Edwin Mudanyi and Kagwe Mutahi beating the rocky pair of Davis Kato and Emma Ogwang 7 and 6. The pair of John Karikuwe and Mike Kisiya was also in red hot form beating Herman Mutebi and Martin Ochaya 8 and 7. Adolf Muhumuza combined with Ismail Muhammud to register the first-afternoon point for the host with a 5 and 4 win of a Jeff Kubwa and Denis Saikwa.

Kenya could have taken an outright lead but teenager David Kamurindwa sunk a birds’ heart for the host on the 18th to square the match and Uganda a share of the lead. “I think the games we played were played fairly and everybody is playing reasonably good golf. So the love for golf is not bad. So I think, this is how it should be for now.” Said, John Leagland, Coach Team Kenya. “Yeah, I can’t condemn the fact that we match play you can’t predict. The guys always first have to play, because the guys we have on paper really look but what I expected yesterday I did not expect it. So let’s see what goes on tomorrow and then see if we can get in the following morning.” Said, Amos Kamya, Coach Team Uganda.

Uganda’s captain started out the afternoon section after he had paired with Ronald Rugomayo to share the spoils with Edwin Mudanyi and Kagwe Mutayi. “We’ve sat with players, we’ve made a few changes now we know how to handle whatever is coming but we expect to tomorrow at least take a lead of 3 to 4 points to give us a better play on Saturday for singles.” Said, Becca Mwanja, Captain Team Uganda. True to the captain’s word, changes were made following morning foursomes youngster Davis Kato wasn’t involved at all, Emma Ogwang was to be paired with Martin Ochaya, Ronald Rugumayo was also to try to work out a chemistry with Herman Mutebi.

Kenya captain Alfred Nandwa was to pair up with Samuel Njoroge to face Adolf Muhumuza and Ismail Muhammud in one of the peak of the matches. “Well, the nice thing is; if we can grow in the tournament, then anything else is possible but am, you know Uganda plays on the home course and it is also difficult to play people at a home course so we hope for the best, will see what can happen.” Said, Coach Team Kenya. The curtain comes down on the tournament after Saturday’s singles round.