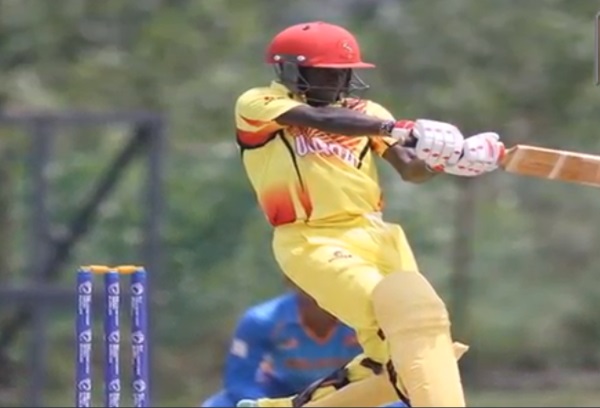 What a tournament Mohammed Efren is having after an underwhelming start against Malaysia when he went to wicketless and toiled to do just seven runs. Efren has stood on style picking up awards of the man of the match in wins over Bermuda and Vanuatu. He needed just 14 balls to notch his 50 against Vanuatu. Efren’s aggressive batting helped Uganda recover from a shaky start to set Vanuatu a competitive victory target of 2-23.

Efren then combined with veteran Frank Nsubuga to rake Vanuatu stop order. The South Pacific Ocean nation eventually folded for 141 runs in 47 overs. Efren helping himself too threw wickets, Uganda’s bowling Coach Jackson Ogwang was full of praise for a 3D. “We are trying to go harder at them and he got runs for us and that took us to 220 that’s where we got the win today. Going forward I think the tournament is open now since Malaysia has lost that side but our focus is winning our own games, we have to focus on winning our own games, we will control what we can control.” Said, Jackson Ogwang – Cricket Cranes Bowling Coach

Elsewhere, Denmark inflicted the first defeat on the hosts Malaysia. Set 184 victory, Malaysia was all out for 146 in the 46th over, only the top two finishers in round Robbin Tournament stand a chance to advance to the ICC World Cricket League Division Three.