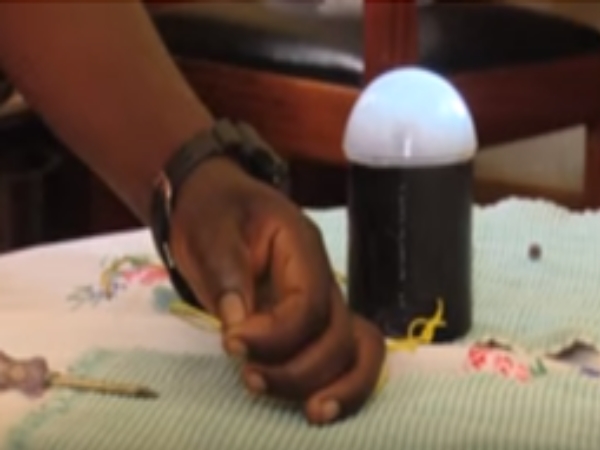 Julius Twine lives with his guardians in Bugolobi Kampala. The 25-year-old has always had an interest in technology and keeps a tool box containing some of the materials he uses for his innovations. Twine who had some training in electronics from a technical school explained that the bulb was made from a pipe and a plastic bottle top. “I have been coming with different projects. This one, it’s because many Ugandans they have been losing their lives especially in Kampala or in towns where the people, electricity goes off and the run for candles and at the end of the day the candle burns the house, millions and millions of money they’re lost.” Said, Julius Twine.

He used materials picked from all the electronics like capacitors from radios. “Use of capacitors they act as storage and two; they help you to change from AC to DC.” Said, Julius. Twine said he had so far spent 60,000 shillings to create the bulb which is switched on by connecting two wires. The other two wires connect it to the power which lights and charges the bulb at the same time. “When the power goes off right now, let’s say when it has gone off. It is off now, it will give you light for two days like the ways how it is lighting, and then when the power comes again it will just show you the light, the light changes when the power comes.” Said, Julius. According to Twine, the bulb can save up to 90% of power because it runs for one night and keeps power for three days. “They have been crying for electricity bill where especially schools, supermarkets in big companies where the lights remain on, there is no bulb in Kampala or worldwide which can give you a backup of light for two days, three days.” Said, Julius. His plans stretched far beyond the TJ17 Beerako Energy Saver. Julius Twine’s TJ17 Energy Saver will run for three days and all that he needed was to replace the Lithium battery which goes on the phone with a stronger one and change the capacitors and transistors inside plus the LED lights to have better lights. He had the ingenuity to produce a bulb that will run for eight days without electricity.

“So if I get like much more capital which is used to buy, at least buy the real requirements.” Said, Julius. Also among his innovations was a self-powered charger which used Lithium ION cell phone batteries. This had a mother board onto which resistors and capacitors were shouldered. “After reading that theory of feedback system, negative, positive negative feedback system, and then I tried to gather all things according to the theories and I come up with this one, that’s how I came up with the idea.” Said, Julius. It was powered by phone batteries which in turn powered four mortars that rotated using a rubber band like belts. Mortars were taken from old radios.

“The output voltage is feeding to the input voltage to maintain the cycle of the voltage in the system.” Said, Julius. The self-charger which will be used for phones and other appliances which have a USB charging system can run for three months which made it ideal for areas with no electricity and for troops in combat. This creation had at least cost Twine 400,000 shillings. “With this idea, because of many Ugandans worldwide they have been with a problem of charging phones especially smartphones.” Said, Julius. And although this piece of information he had could not be readily verified, Twine said he shared his innovation with the Inspector General of Police General Kale Kayihura and President Yoweri Museveni. “He liked the idea where he was saying that he was willing to support me through State House but due to lack of the people to reach the President I have not yet got my promises.” Said, Julius. The young man explained that depending on how the components were scaled, they could produce power enough for a home with items like televisions and fridges among others.