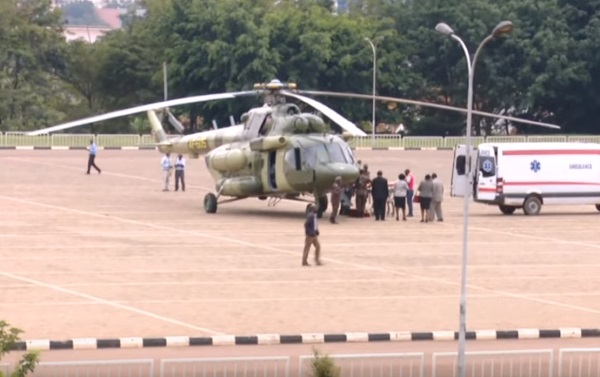 The State Minister of Ethics and Integrity the Rev. Fr. Simon Lokodo was on official duty on Kalangala Islands when he fell ill earlier on Wednesday. He was presiding over an anti-corruption seminar at Ssese Island’s Beach Hotel. “A doctor from Kalangala Health Center IV came and examined him. The doctor found out that his pressure was high.” Lokodo was first rushed to a health center in Kalangala where he was stabilized. District officials later communicated to Kampala and a military helicopter was immediately dispatched to evacuate the Minister to Kampala.

The chopper later landed at Kololo Ceremonial grounds. Security agencies blocked journalists from covering the Ministers arrival but we managed to get a few shots in Kololo. Among the people who received the Minster at Kololo was State Minister of Health In-charge of General Duties Sarah Opendi. An Ambulance was on the hunt to move the Minister to Uganda Heart Institute in Mulago. At Mulago Opendi told journalists that her colleague was in a stable condition. “Dr. Florence who was with him at Kalangala did her best to really resuscitate him and fortunately by the time he arrived in Kololo he was now conscious. And we have brought him to Mulago Uganda Heart Institute where further investigations are now going to be conducted. But of course what I can state is that for now, he is out of danger he is fairly stable.” A few weeks ago State Minister of Health In-charge of Primary Healthcare Dr. Joyce Moriku returned home from Nairobi Kenya where she was flown after suffering acute stomach complications. She was in intensive care for about a month.