ON THE FARM: Irish Potato Varieties In Uganda 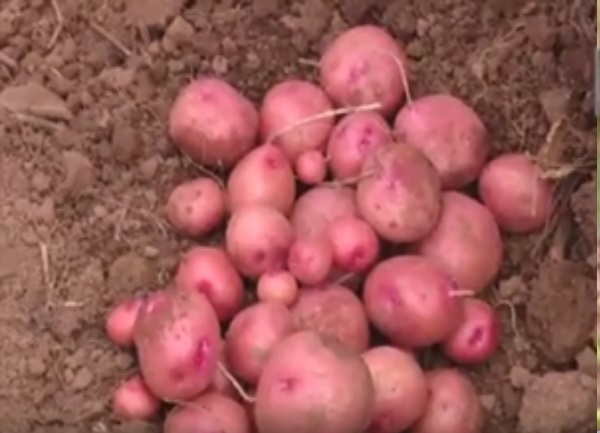 It is rare to find a household that does not grow the Irish potatoes in Kisoro district. apart from growing it commercially, it is also a staple food for every meal. “Really this crop is very important because it this enterprise has performed well and it has given people a lot of money, it has also marketed our district.” Over the years, a lot of farmers had got stuck to growing the local variety group Drangume as the demand increased especially for products like chips and crisps. New varieties like Stargata, Alizona, Conect and Tausi were introduced. “So if you look at a variety like, because for processing we need varieties which have shallow eyes. If you see this one, you may think the eyes are not there because they are superficial, they are on top. But when you look at this Victoria, you can see the eyes are sunken there, they are deep. So when someone is peeling, you’ve to cut deeper. So that means you will have to incur more losses, wastages when you are peeling such a variety than this one.” Said, Deo Tebandera – International Fertilizer Development Center.

Deo Tebandera of Uganda International Fertilizer Development Center said the new varieties would be better. “Before these varieties were released I said we evaluated 21 varieties, but out of those, 7 were released. These were varieties that proved and performed very well; some had over 50 metric tons per hectare and here in Uganda the average yield is 7 metric tons per hectare. So some of these varieties had during the National Variety Performance Trials, they did over 50 metric tons.” Farmers were benefiting from practical demonstrations as they had been sensitized about the new varieties and their yields. “We thought it pertinent to popularize them amongst the farmers and that is why we have this on-farm demonstration trial here.” the demonstrations started in Rugukimbiri, Bulamba in Niyabushenyi Sub-county.

So this variety Victoria is also susceptible to late bright disease but farmers are growing it because they have known how to manage the disease; management practices through fungicide spraying, a manipulation planting time, things like that. So they are able to manage the disease, the late bright disease would happen not to be a problem to deter farmers from embracing the varieties.

In the plantations, eight varieties were planted protesting the process roles of farmers, so they could compare the yields for a particular variety. These varieties were evaluated on research under research managed conditions. But now, to convince farmers that these varieties perform well, we thought it to bring them under farm managed conditions then the farmers evaluate them as well and identify or select what varieties they feel will do better for them.” Despite the long dry spell that hit Kisoro district earlier this year, the new varieties were seen to perform better than the local ones in terms of being resistant to diseases and drought. “The performance really, this varieties I see they have performed well, bearing in mind that; these varieties were planted on 29th March and they only had rain in April, in the first week of May, rain disappeared to date. But now, you can see the cube size; most of them have large cubes compared to Rugwangume the local variety. They were planted the same day and they have been under same management practices but you can see the Stargita variety.”

Kisoro district Agriculture officers cited some challenges they were likely to face when they embraced the new varieties. “One is a challenge of seeds. As you’ve been seeing, it will be very had to come up with a large quantity of seeds in a short time. Because whatever is not produced in quantity cannot have market. Then the other challenge is that; for quite some time, the marketing of potatoes in Kisoro and Kampala is somehow biased to color. When you go to the market and somebody has a white-skinned variety and another one has a red one, the red one sells faster irrespective of the size.” Said, Justus Rwakale – Agriculture Officer, Kisoro. “Well, there has been a bit of a decline in the production of potatoes in our districts basically because of this unpredictable weather.” Said, Solomon Himbaza – Kisoro District Agric. Office.