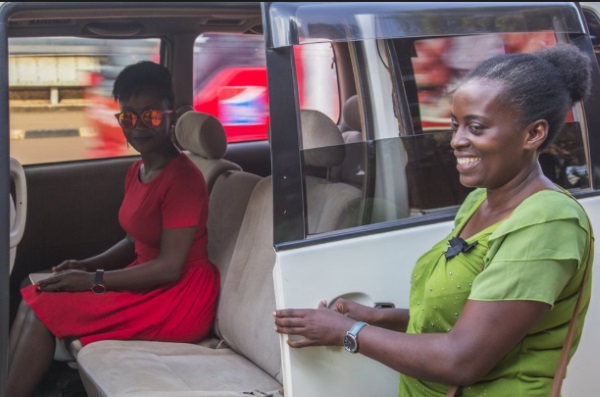 If you have lived in Kampala and boarded a taxi then you are familiar with The taxi is a Public service van that has been remodeled to sit 14 people. It has four long seats at the back that sit three people each and three at the front that sit two passengers and the driver. The conductor is the one who mans the taxi. he or she sits right behind the driver and that seat carries four people, three passengers, and the conductor. The conductor's duties are to open and close the door to let passengers in and out of the taxi, collect taxi fares, call and convince customers to board the taxi, help customers with heavy loads in and out of the taxi, s /he is basically the face of the taxi.

Now consider the nature of the job, this was considered a man's job, however, of recent we have some women joining in the field. One such woman is Nakiwala, or Naki as she is referred to who mans a taxi that plies the Bugolobi-Luzira route. On first glance, you may think she is a man but when she starts calling out for customers, her feminine voice makes you look again and that's when you realize she is a woman. She is dressed as a tomboy in baggy cargo pants, a big t-shirt, a cap turned behind, she has sneakers and a waist bag around her waist. She is aggressive and works with ease, I am intrigued and wish to know more about this woman as I disembark I ask her for her phone number and request to call her later for an interview, she readily agrees but asks me to call after 5 pm since that’s the time she leaves work. I call her up the following day and we agree to meet on Sunday afternoon, which she informs me is her day off.

Sunday afternoon finds me seated in Naki's house, I had called her on Saturday evening was given directions and even invited me for lunch, I had politely turned down the latter. I had waited till two hours after the usual lunch hour and arrived, locating the house had not been an easy feat, she lived in a slummy area of a place called Kitintale, the place was congested with houses, makeshift kiosks, people, stray dogs, and children, it was filthy, to say the least! I stood there confused for a while wondering which direction to take, I approached a group of young boys lazying on a bench and asked if they knew Naki. as soon as I mentioned her name, they laughed and "hi-fived" each other, they assured me that Naki was their friend and one of them volunteered to take me to her house. five minutes later he was knocking at her door. as soon as she opened, he handed me over and walked away! She was surprised that I had found her place so easily which was not true, as a matter of fact, I did not know my way back out of this slum. I was invited into her house which was a two bedroomed house, packed to the brim, the room I was seated in served as a sitting area, bedroom, and wardrobe. After exchanging our pleasantries, I got down to business, I wanted to know how she had ended up in that profession that was dominated by men!

Naki was the third and last born of her mother, who was the fifth wife of her father, she does not know how many children her father sired to date! Her father was a drunk who had inherited a huge chunk of land from his father, being the only boy, he married women for cheap labor, once married he assigned each of his wives a portion of his farm to till, sell the produce and hand over the money, all he did all day long was drink and a womanizer he never cared about anybody and it was up to the wives to fend for themselves and their children. He was feared in his compound and beyond, his word was final, anyone who showed any sign of rebellion was beaten to the pulp. His mother was married off at age fifteen, she was a strong quiet woman, she was strict with her children and ensured that they were well behaved, she was determined to give them an education. Of all his wives, her father had never set his hand on either her or her children. After marriage she had quickly realized her husbands weakness and ensured that she never offended him, she worked like a machine, sold her produce and handed him some of the money she was wise enough to save some for her children and they all went to school, Naki was twelve when her mother had passed on, she was told that she was bitten by a snake on the farm and had died alone by the time her body was discovered, it was cold and stiff! She and her siblings were distributed amongst the wives and that was the end of Nakis school. Her stepmom turned her into the household slave. When Naki could not bear it anymore, she had fled, she was fourteen at the time. Her then boyfriend had brought her with him to Kampala where he worked as a hawker, Naki had lived peacefully with him for seven years and bore three beautiful girls, she was happy in her role as a housewife and mother until life changed again, her husband did not come back home one fateful day! She had waited for him in vain, Naki did not know where to start looking for him from, she had tried to contact his friends but none of them knew his whereabouts. Nakis landlord evicted her and she had ended up in an unfinished building, she watched her children cry of hunger and went out in search for a job, she had landed on one as a waitress in a busy marker restaurant, she was paid a commission of 10% of each plate of food she sold, her boss allowed her to scrape off food leftovers and this ensured that her and the children did not go hungry. With time Naki saved money and began selling porridge in the night, with this extra income she was able to rent a one-roomed house for her and the girls. Her neighbor was a taxi driver, and Naki pestered him daily to teach her how to drive, he assured her that this was a man's job but this did not deter her. As fate would have it, her neighbor's conductor did not report to work one morning and he asked if she could fill in for him, Naki was given a crash course and they set off. Naki was not prepared for what awaited her, she was mocked and taunted all day by both passengers and fellows at the taxi park. At the end of the day her driver handed her 10,000/= shillings, he was so sure that she would not report to work the next day, he had clearly underestimated her. The bullying Naki faced had made her more determined to learn and work better than any man, the 10,000/= pay she received had just confirmed to her that she had to keep this job. She was up early and her driver found her waiting for him, this time she had dressed in pants and was more boyish looking, she worked well and hard that by the time the original conductor came back to claim his job, his boss no longer required his services, he had found the perfect employee. Naki was now able to send the children to school, moved to a bigger house and was saving money to buy land. Her boss teaches her to drive once in a while and her dream is to become a driver which she says earns more and is less stressful.

When I ask her if she still faces stigma she responds in affirmative, she earned the respect of her colleagues at the park but is still shocked when a customer makes an offensive comment, most of these are female and she wonders why they feel the need to put her down. She, however, has no regrets about her profession, she gets off work at 4 pm and had enough time with her children. I ask if she has ever heard of their father again? She has not, it is as if he fell off the face of the earth, she has long concluded that he passed on and moved on. Her future is bright for now, she yearns for a place she can call her own and is determined to own her own house and send her children to school, she believes that that is the best way she can help them have a brighter future.

As I leave her place I am in awe, if this illiterate woman is able to create opportunities for her self and better her life, what is your excuse??