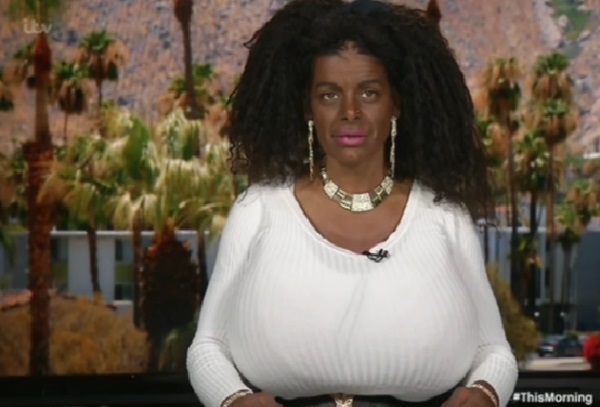 Martina Big is European of German origin who claims that she has always felt that she was African, she had a big admiration for people of African origin and on her eyes, were the definition of true beauty. In January 2017, she began her transition from a white to black, she openly shared her journey on her blog and facebook page. According to her writings she got her treatment from the USA which involved melanin treatment and slowly she began to transition into the black woman she is now, she says the treatment increased her body’s own melanin production, in other words, a hormone that increases melanin production was introduced into her body. She also has undergone breast enlargement surgery and her breasts are 32D today, Pamela Anderson the Baywatch actress is cited as her role model. in this. Martina big claims that her extremely large breasts are her biggest asset and openly states that she is still enlarging them! Currently, each breast weighs 7kgs meaning that she carries around breasts weighing 14kgs. Several people have raised concerns about back and she boldly says that she exercises her back. about her sleeping position, Martina Big says she uses many pillows, according to her big is never big enough.

Martina Big has received a lot of backlash from the Black community who are enraged at her calling herself African and she frankly doesn’t understand why because she considers them beautiful. According to her she is finally happy being African and intends to visit the continent.

To be honest I think she may need some psychiatric help and intense counseling but then I also find it hilarious and refreshing at the same time that a white woman wishes to be black, the reverse is more rampant with black people bleaching and administering all sorts of creams, injections, and tablets in a bid to become white. So for once, the tables have turned. Martina Big claims that her hair texture has become African and she now goes to African hairdressers, beauty shops and is consulting with them in her makeup, interesting huh!!

We live in a world where people have resorted to doing whatever makes them happy and totally disregard what others think or feel, the norms and values of society are no longer black and white but shades of grey, at big airports we have a male, female and the other restrooms clearly demarcated. Who is the “other” under this group fall the transgender, gay and anyone who doesn’t identify with being male or female? We have watched as men transition into women, Bruce Jenner the Olympic gold medal winner, father of 8 adult children is now a woman after several surgeries, I will probably write about him, his story is rich and deserves an article on its own.

So when Martina Big decided to do what makes her happy and become “African” you wonder why people are mad. From her travels and interviews all over the world, she is already reaping financial benefits from her new skin color. Her next surgery is for butt implants so she can have the full African figure, did I mention that she already filled up her lips to look African?

Martina Big is an experiment one needs to watch closely, as the inevitable happens and things start to fall apart in front of our eyes as was the case with the Michael Jackson experiment. I encourage you my readers to Google more about Martina Big, let’s see his far science can push against nature, we may have another story to tell our grandchildren.