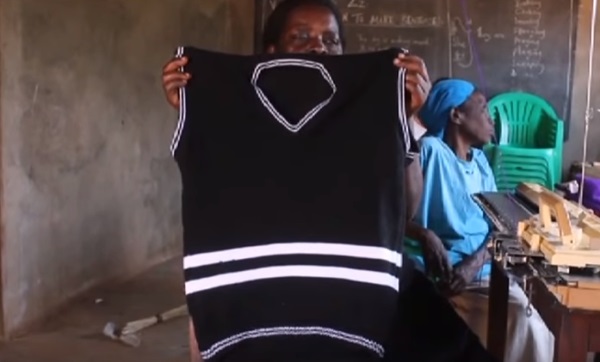 Rose Kalibakya lives in Kikyusa town in Kikyusa Sub-County Luweero district. She leaves home to work every day making her way to a block of rooms where she knits sweaters. Kalibakya first checks the knitting machine and then begins to thread. “We can knit about three sweaters in a day in case our customers are available.” Said, Rose Kyalibakya – Founder, Kikyusa Development Association of the Blind.

She lost her sight during the Luweero bush war of 1981 to 1986. She was in her teens when her parents helped her to get someone to pay for her skills development course and that’s how she learned to knit. “They taught us how to knit sweaters so that we could support ourselves.” She said she later returned to Kikyusa to begin work but it did not go as she had hoped. “The people there were in disbelief. They doubted my blindness. They even wanted to touch my eyes.” And so how does she measure the size and height of her customers? “I can tell a person’s size by touching them. If it is a student, they only need to tell me their age.” When Kyalibakya has got the measurements that she needs, knitting process begins. “I do not want to be distracted because I have to concentrate.” “I depend on memory mostly because I can’t use the counter.”

When she realized that there were many visually impaired people in the Sub-County, she made a decision to start the Kikyusa Development Association of the Blind. They have two knitting machines and they work as a team on different stages of their projects. And when a garment has more than one color, they consult. “We depend on those who can see to tell us the color of the wool.” In spite of their struggles, they said they were happy that they could provide for their families. “A customer can make an order for 50 or 100 sweaters. But they only pay for what you’ve finished...” “I think the business has survived on trust and references because we do a good job.”