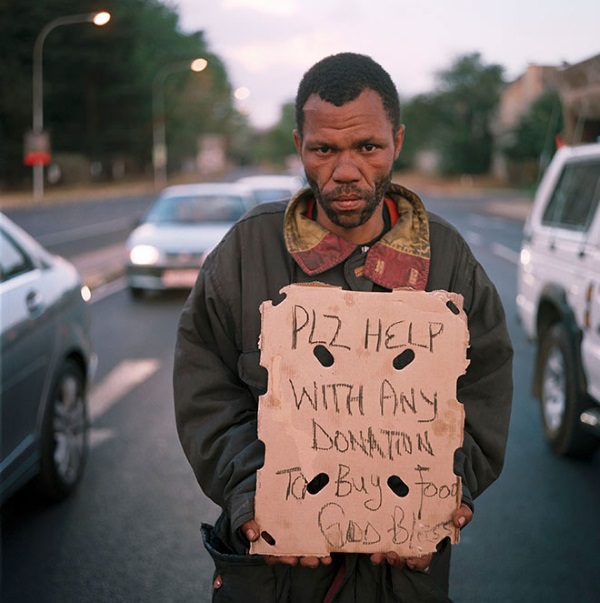 I am blessed to have an office with a view, there’s not much to see outside, I mean I work in the city centre, so you either see people or the skies above. Two things I love about my window is that I get to open and close it as I wish and I also get to watch people. I have always been fascinated by people. I pride myself in being able to read people with about 70% accuracy. It’s not rocket science, I guess you could also do the same if you took the time to watch and critically analyze people’s actions. There are some constant features on the road across from my building, one is an elderly beggar, I do not know for how long he has been begging from that position but I noticed him on the very first day I leaned out of the window I am so proud of. He is always clad in a white kanzu and a Moslem cap. He has one leg and a stump where the second leg used to be, I have often wondered how he gets to and from that place, as far as I am concerned he is part of the landscape!

Working in the middle of the central business district one gets used to constant chaos, its common place for us to be interrupted by noise, sometimes thieves or a pick pocketer is being chased or street kids are fighting, or any brawl. You can never tell when a brawl is about to break out, they usually happen so fast and end just as quickly. Today was no different, this was the second one to break out and since I was so busy, I ignored it just like I did the first twenty minutes ago, as far as was concerned it was none of my business. However, the angry voices got louder and louder and the crowd seemed to be getting bigger. Curiosity got the best of me and I rose up to look outside my window. the crowd was gathered around the Moslem beggar, they seemed to be ordering him to get up. I wondered what the world had come to, to order a one-legged elderly man to stand up on one foot seemed so inhumane.

They continued urging him up until one roughly pulled him up from his sitting position, he reached inside his kanzu and produced a second leg. I gasped in shock. this old man had two legs! The crowd got violent and began shoving and slapping the old man. pushing him over and urging him to walk. I was in shock. who would have known, how does one hoodwink people for such a long time? For the four years I had sat in this office, that one legged Moslem beggar held fort across the road and now there he was walking on two legs. how he managed to fool us I didn’t know! I was literally gaping as I watched the events unfold. The crowd was growing bigger, louder and more violent as they pushed the man down the street. I sat back in my chair in shock.

It’s then that I recalled a similar incident shown in a Kenyan television of a female beggar who was unmasked. she was pretending to have one arm, the crowd also turned violent and were almost clobbering her to death but was saved by police in the nick of time.

I now look at these crippled beggars differently, whenever I pass one I can’t help but look twice just to prove that the beggar is really crippled.