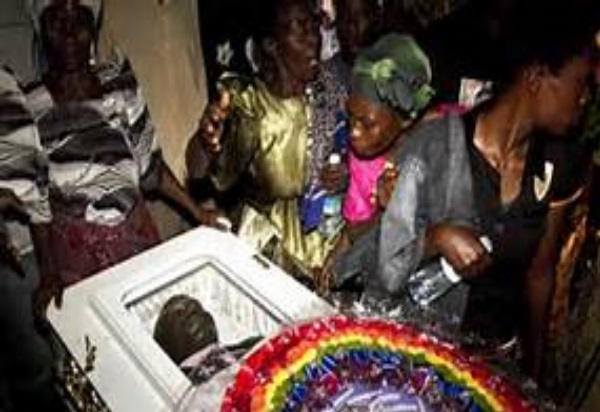 Today I choose to write about a rather unpopular yet inevitable phenomenon, death! We shall all end up dead at one time hopefully after we have fulfilled our purpose in life. We cannot bury our heads in the sand, this is something we are faced with daily and only God the creator knows when and how we will exit this world. Have you ever wondered how different life would be if we knew our expiry dates? Can you imagine how many things we would accomplish in the time slot awarded on this earth? The rich and powerful have sought ways to stay immortal, scientists have been tasked to find ways of making man live longer and have come up with all sorts of concoctions to try and achieve this feat without any success.

Plastic surgery and botox will temporarily enable one to look younger than they actually are, the pharmaceutical industry has come up with anti wrinkle creams, lotions and drugs that are said to slow the aging process, hair dyes to darken grey hair among others. However aside from aiding one’s look, they have not unlocked the key to immortality.

What is the right age to die? According to the Bible, one is to see their children’s children and die peacefully surrounded by their family and grandchildren. this seems to be a perfect way to exit life, after living it to the fullest. The wisest man, King Solomon spent a lot of his later years musing about death in the books of Ecclesiastics and Proverbs. he found the accumulation of hard work, wealth and the pleasures of this world all vanity when the rich and the poor shall all end up dead! He advised one to enjoy the pleasures of this world.
I have buried several people in my not so long life on earth, reality finally sinks in the moment the corpse is lowered into the grave and covered with soil. The procession of the living quietly walk-away from the grave site living the dead alone on his journey. Personally, this is when it finally sinks in that I will never see that person again, they are gone forever left alone to their own devices.

I must say it is painful but easier to say good bye to an elderly person than a young one! Just last month I buried my 9year old nephew and it was the most heartbreaking funeral I had ever attended. Every parent knows that at that age, the child is most enjoyable to be with, they are old enough to be sent around on small errands, somewhat independent and have a mind of their own. one can hold a conversation with this child, this is the time you begin you see your child’s character develop and inevitably begin to plan for their future ahead accordingly. No parent is planning to hold their child’s funeral at this age. Some years back I buried my 6 months old nephew. Yes, time makes the pain lesser but at times I still wonder what he would be now had he been given a chance to live! I have buried my sisters at their prime, very beautiful and intelligent young ladies. I spent many years angry at God for taking them away from us. as I approached the age they died at, I kept wondering whether I would be next, I lived on and realized that I could choose to be angry or try to live my life to the fullest, I chose the latter!

I buried one of the funniest most loyal friends I have ever had, I still miss her to date. she lived her life according to her rules, she refused to conform to society! When she was told that she was suffering from an incurable disease and would have to depend on drugs for the rest of her life, she checked out of the hospital and went straight to her favorite bar. she lived her last days doing what pleased her soul and a lot of people criticized and rebuked her but she was not ready to depend on drugs for survival. I couldn’t help but smile at her funeral. she had cracked the code, she died on her terms and it takes courage to do that!

I have attended funerals of people who have put their lives on hold, people who have postponed living in order to pursue their dreams! A young man I once knew had very big dreams, oh yes, he had planned out his life perfectly, I believe he had a check list and would not deviate from it, he worked hard and saved every penny of his living a life of a miser. he had grown up in poverty and swore to work hard and get out of it. I admired his discipline and zeal. I saw him tick item after item off his check list.

He graduated from university with his first degree, bought his first plot of land, got married, built his first house, bought his first car, went back to school and graduated with his masters, bought his retirement land, he intended to retire on a farm, went and bought him some bonds, next was to take his wife on the honeymoon they never had! But lo and behold, the grim reaper was lurking in the corners. As fate would have it, this young man met his death under the most unusual circumstances. as he was filling up his tank at a petrol station, a truck lost control and dragged his car for some kilometers eventually smashing it into a wall, and that was the end of his journey!

I strongly believe that life is today, it is now, live it like it is your last day, make peace, love hard, and do not postpone your dreams, above all make peace with your maker, only He knows when he will call you, be humble!