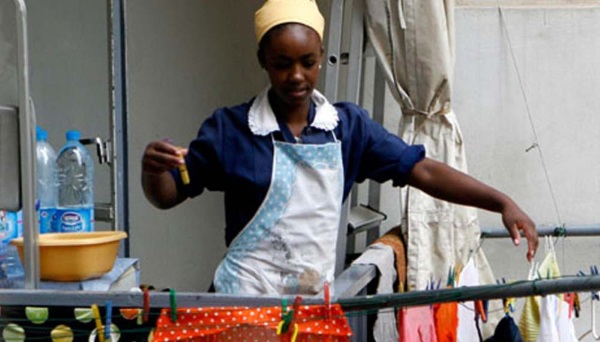 Almost every single household in Uganda has a maid irrespective of their income status, the rich, middle class and poor all have maids. The maid who is also referred to as the house help, house girl, servant or nanny is a very important member of the family. Some families rely so heavily on the maid that they seem to fall apart without one. the family ceases to function in the absence of a maid. There is no clear job description for the maid and in most cases, it is not defined as it is anything the boss wants it to be. the maid is the nanny, chef, house manager, cleaner, gate keeper, driver to mention but a few. Basically, a good maid must be able to multi task. A typical day of a maid begins at 5am – 6am when the maid rises first in the house and begins her chores which include cleaning the house, washing utensils, preparing breakfast, getting children ready for school, hand washing clothes since most households do not own a washing machine, preparing lunch, ironing, preparing dinner, bathing children, cleaning, dusting, running errands like shopping, picking children from school, the maid is on her feet non stop till 9pm in some households when she gets to sleep and continue the routine.

Considering the work load of the maid, one would expect the maid to be highly paid but unfortunately this is far from the truth as most maids are under paid and in the worst-case scenarios not paid at all. Some are subjected to all forms of abuse verbal, physical and emotional. They are ill-treated and segregated against, given different meals from the rest of the family, isolated and spoken to like a slave. Some of them are sexually abused and suffer the effects of this abuse like loss of self esteem, pregnancy, contracting sexually transmitted diseases and death!

Majority of the maids come from very poor backgrounds and are vulnerable. They are illiterate and do not know their rights. They are trapped in horrible situations and do not have anyone to turn to and so they endure this ill treatment and torture silently.

A few non-governmental organisations have come up to fight for maid’s rights but unfortunately, they have also been accused of corruption, acting as debt collectors and asking the maids for commission. In some cases, they recover the money but do not remit it to the maids. They seem to be more interested in making a quick buck rather than humanitarianism. When cases are reported to the police, they are accused of siding with the employer rather than the maid and are said to accept bribes in order to hush the crimes committed.

Uganda does not have a minimum wage, so it is upon the discretion of the employer to decide what amount he wishes to pay the maid. there is no contract or agreement signed and in case the employer doesn’t pay, the maid cannot prove her case. it is her word against the maid’s word!
However, there are also some maids from hell, who come into people’s homes with ill will and evil intentions. Some of them are thieves or working with a band of criminals and sweep their employer’s houses clean of all valuables and money. Children have been kidnapped, maids have been caught on CCTV cameras torturing innocent toddlers, and some children have lost their lives at the hands of maids.

This maid situation is not limited to Uganda, we have all read and watched in horror videos showing similar scenarios of maids torturing children, conniving to steal, seducing their bosses among others. With the recent influx of maid expatriates to the middle east, most have returned with horrifying tales of ill treatment by their Arab employers. A video on social media showed a maid slapping a new born baby for crying, another one in China was stomping on a toddler and almost drowning him!

One may argue that it is the ill treatment by the employers that is leading maids to behave in this cruel manner but then how do you explain those who are treated well, paid highly but still go on to commit such despicable crimes against innocent children.

My suggestions to the employers is to be very meticulous when interviewing these maids, find out more about their background, take time to go to their ancestral homes, ask them to avail an LC letter, national Id, passport photo, gather as much information as you can and file it, agree on the amount of money, such precautions may not necessarily prevent a crime from being committed but it will aid in catching the culprit.

The maids too would benefit from an association that is dedicated to fighting for their rights but such an association must be formed by the maids for the maids, they should be educated on their rights, and expectations and this will also help them act professional and come up with a uniform wage.