The Flamboyant Lifestyle Of Today’s Preachers! 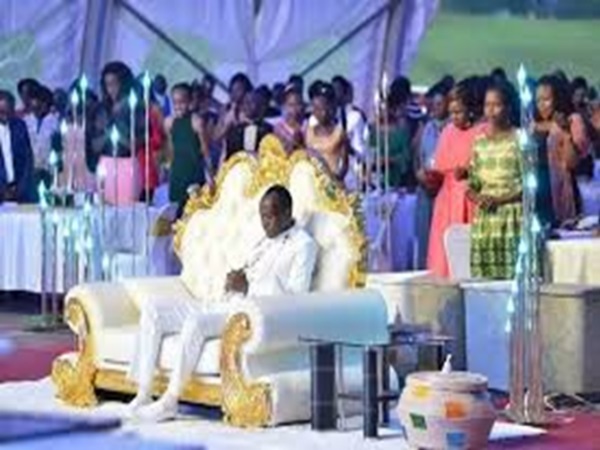 One of the most contentious topics to write about is religion. like politics, it brings out a lot of raw emotion and at worst hatred. The Pentecostal movement was birthed out of the Anglican church and with it came more charismatic preachers, worship and praise leaders. this movement is evolving daily and now the prosperity gospel is very popular. Today’s preachers are wealthy and not afraid to show it and they encourage their flock to give generously with promises of reward. “the more one gives the more one receives”!

Social media this week was flooded with pictures of a prophet’s feet being kissed by his followers in the name of “honoring” the prophet! The event to honor this prophet was widely publicized in the media, pledge cards too were available ranging from 200,000/= to 5,000,000/=, there was no provision for those who may have wished to contribute but could afford amounts lower than 200,000/=. The event was meant to be a dinner and people thronged the event in large numbers paying millions of shillings. However, to some even after paying such a hefty amount, they were served snacks and not dinner. Whilst others argued that the act of kissing the Prophets’ feet was an act of worship which should only be reserved for God. his followers passionately defended him and said it was an act of honor! They went ahead to say that the prophet did not ask them to kiss his feet, they did so out of their free will! So far, it was a battle of words, whether honor was worship and worship was honor?

The Kibwetere incident was still fresh in the minds of Ugandans. Kibwetere was a prophet with a large following in western Uganda who managed to convince his followers to sell all their properties and hand over the money to him. He will be remembered for locking up his followers in a hall and burning them to death! To date, the whereabouts of Kibwetere are unknown. He is said to have fled with large sums of money. The followers of Kibwetere were mostly illiterate farmers and herdsmen of Western Uganda and the neighboring Rwanda, it was argued that it was easy for him to hoodwink them because of their illiteracy!

What baffles me today, is that the elite people who are educated and enlightened are the ones blindly following these Prophet’s and Preachers! the fact that they are educated and exposed, they put up a strong argument in defense of their prophets, quote verses to justify their behavior and if that fails, they are quick to tell off anyone judging their actions to mind their business since it is their money they are free to spend it as they so wish! They can afford to gift and tithe large amounts of money. They follow them religiously and do everything they are good to do, most of today’s gospel is about sowing seeds in order to reap, the bigger the seed the larger the harvest!

The preachers are living a flamboyant lifestyle financed by their flock. From driving state of the art 4wheel cars, living in mansions complete with swimming pools, lakeside views, move with bodyguards for security, some have private jets to fly them around the world! What baffles me is that the flock do not seem to mind catering for this lavish lifestyle, some of them are needy people themselves but they will willingly give their last penny and walk home!

Todays gospel is more about giving, sowing seeds and fundraising than healing souls. One must pay to be prayed for, buy anointing oils, holy water, holy rice, holy pens, a Prophet in South Africa recently launched a holy ATM to ease payments of tithe and offerings, he also launched a holy pregnancy kit, which according to him will tell the woman who the father of the child is! All these items come at a hefty fee!
Which brings me to the question, at what point do we say enough is enough and carry out an intervention? Is it even possible to speak sense to people who have their mind set to follow an individual? Is freedom of worship in our nation being abused? Can government intervene and regulate these mushrooming churches? Should we just look on and hope that another tragedy does not befall us?

As we ponder the above, we must also ask ourselves how we can differentiate between a true prophet and a false one?
I do not pretend to know all matters concerning God, but as a Christian, I choose to seek my answers in the Bible, I am yet to find a single verse in the Bible where Jesus or his disciples asked for money before they prayed or healed someone. Jesus lived a simple life, in fact one is encouraged to work in-order to make an honest living. I still cannot find justification for this prosperity gospel, sowing seeds, fundraising for cars, mansions for an individual! However, the same Bible warns us of these “prophets” and “preachers”! I watch in shock as people I used to think are smarter and more schooled than me are kissing a fellow man’s shoes, buying holy rice, ferrying jerricans of “holy” water! I listen to them as they passionately praise their “prophets” and try to woe me into attending just one fellowship with the promise that it will change my mind, I gape as one tells me to carry a handkerchief, photograph or anything tangible that will act as a connection and wonder whether I am being persuaded to enter a shrine! All I can say for now is, “Our Father, who art in heaven, hallowed be Thy name, Thy kingdom come on earth as it is in heaven ...”