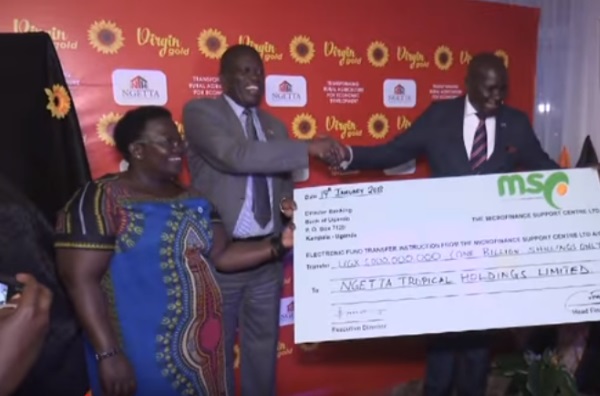 Such sunflower farmers across the Northern region of Lango may now worry less about access to markets and indeed prices for their produce. A new Miller Ngetta Holdings has been granted a 1 billion shilling line of credit from the Microfinance Center to purchase at least 1 million kilograms of sunflower produce from local farmers in Lango. “This will enable us to establish more enterprises in a call for value addition for our sunflower thereby creating employment opportunities for especially our youths. We note the challenges you are facing and I would like to assure you of our support to address these challenges accordingly.” Said, Michael Werikhe – Minister of State for Trade.

With this processed cooking oil now unveiled, it is also hoped that increased production by such domestic millers supported by farmers could shake off the current import bill on vegetable oils. “We aim to look at how they connect with the smallholder farmer so that they can ensure a steady supply of raw materials. We have supported them to strengthen the capacity of smallholder farmers with the aim of making sure that the co-operatives act as businesses rather than as a collection of farmers.” Said, Collins Apuoyo – Team Leader, NU-TEC Market Development.

Ngetta Holdings is expected under terms to purchase sunflower produce from farmers with worth 200 million each week. A target that will see collections from 33 co-operative societies across the region. “In season two of 2017, we have bought grains worth 1.2 billion which is far below the capacity we need; it’s almost 20% of what we need. And therefore the challenge to us, the co-operatives and the farmers is to increase production. So that we can run 24 hours and be able to produce sufficient oils for the country.” Said, Paul Omara – CEO, Ngetta Tropical Holdings Limited.